I love Halloween. It's probably my favourite holiday (other than Christmas) and one that has been a big deal since I was little. As a child our family socialised mainly with Canadian ex-pats (because that's where I was born) and my parent's created a little social circle of similar Brits with Canadian ties or vice versa. Our little gang was often extended to include Americans living in London too and Halloween was always celebrated.
Because trick or treating wasn't the norm at all back in the mid 80s, we used to go en masse to one another's houses, or other families we'd checked with first. I can vividly remember trudging through Blackheath Village in an uncomfortable homemade ghost costume with my little trick or treat bag - I wore the same costume every year until I was about 12. A ping pong ball halved with little slits cut out and put over the eyes, held in place by a pair of sheer-ish white tights worn over the head and a white sheet with a hole in it. High tech stuff. We also used to go to my friend's house to dunk for apples and then her Dad would hide a Rolo in a pile of flour (no drying of the face allowed) and the treat of the Rolo would be somewhat tempered by the mouthful of pastry like flour you'd accidentally inhale.
Today Halloween is a great opportunity to cook some fun food, indulge in my love of kitsch and get dressed up in something amusing, oh, and have friends round to share it with so I don't look like billy no mates. I'm looking forward to tomorrow when I'll debut the costume my little brain has been hatching.... 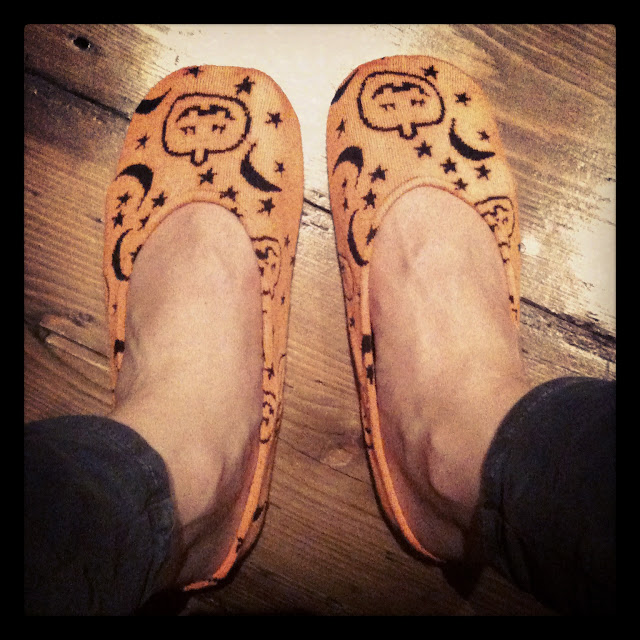 Slippers - Target
Photo taken with Instagram
Posted by mustownmore at 22:54