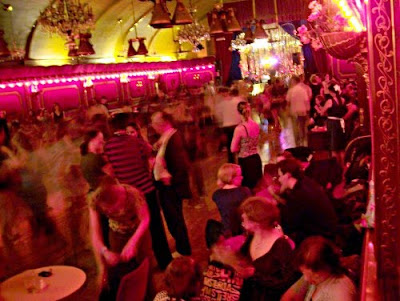 Saturday was a great day - friends, fireworks, food and foxtrots!

First off - discovered the magnificence that is food at Bocca di Lupo in Soho http://www.boccadilupo.com/ - will write a full review later.

Then - fireworks on Blackheath. Still the best in London. FACT.

And to round it all off - the Rivoli Ballroom in Crofton Park, Lewisham. It is amazing. A proper old fashioned 1950's ballroom, even the toilets are really 'powder rooms'. It was so beautiful in a garish, wonderful way. And it was nice to do something at night that wasn't so segregated by age - people were 70 years old doing the tango, or in their twenties hitting the sprung ballroom with a samba. It was great! The only embarrassment is that, despite growing up in Lewisham and living there until I was 22 I have never been. But I will be going again, but this time all dressed up and with some basic dance skills.
Posted by mustownmore at 11:46